The future of hot rodding is here, and it’s as gnarly as ever.

There's a train of thought in automotive enthusiast circles that says electric vehicles can't be hot rods, and there's no way you can have traditional fun with cars powered by an electric motor. Electric cars are boring golf carts, the reasoning goes, and putting an electric motor in a classic car would certainly ruin its character. Right? Well, punch our car person cards, but the Superformance MKIII-E all-electric Shelby Cobra replica is fun as hell.

Fact is, EV naysayers are having to move the goalposts as more high-performance models appear. You can't say they're slow anymore, not when Teslas are setting production car acceleration records. You can't claim they can't corner when Porsche is making electric sport sedans that slaughter mountain roads. But those are big, heavy family cars, right? Where's the lightweight EV sports car, the EV hot rod? It's hiding in plain sight.

Outwardly, there's no giveaway the Superformance MKIII-E prototype is an EV. The SAE J1772 plug hides under the classic chrome gas cap, and there's no hood scoop or side pipes. But not all Cobras have hood scoops and side pipes (hot-take alert: Earlier 289 Cobras look better than later 427 Cobras). The MKIII-E blends the best of both generations, pairing the earlier cars' cleaner appearance with the later cars' open grille and fender flares.

Peek in the cabin, and you realize something is up. There's a center stack now, and it's got a screen in it. More than that, the oddball rearward-mounted shifter is gone. Look closer, and the tachometer goes to 14,000 rpm. Look really closely, and the gauges have special MKIII-E logos with the charging cable making a circle around the car's silhouette.

Turn the key, and you'll either think the starter's busted or, hey, is this thing electric? As of right now, the shifter is on the touchscreen, but Superformance tells us that's a prototype thing. The screen looks out of place in a car originally designed nearly 70 years ago, so it's getting tossed in favor of mechanical gear-selection push buttons. Battery state-of-charge info is already handled by an analog gauge that replaces the fuel gauge.

Drop the hammer, though, and there's no doubt about what's going on. The MKIII-E is damn quick, and all you hear is the rush of wind and a bit of gear whine. It just goes. According to Superformance bosses Lance and Ashton Stadler, it's the quickest Cobra they've ever built, and they haven't finished tuning it yet.

In fact, at the time we drove the Superformance MKIII-E Cobra prototype, it was fresh off the truck from GoTech Performance, the Florida-based engineering outfit building electric powertrains for Superformance. There, the rear axle is replaced with a Tesla Model S P100D's rear motor. (It's under an optional plexiglass window in the trunk that looks cool but is nearly impossible to clean.) Under the hood, frame crossmembers are rearranged and 31.2 kWh of LG Chem lithium-ion batteries are mounted. It sounds like a lot of equipment, but according to Superformance, the MKIII-E Cobra is about 100 pounds lighter than the company's conventional 427 V-8 model.

Per the cockpit screen, the motor makes 302 kW/405 hp, or just 20 hp less than an original 427 Cobra. The company says torque comes in at 1,500 lb-ft, but we suspect that's a wheel-torque number, not motor torque. A Tesla Model S P100D rear motor makes 503 hp and 525 lb-ft, and power is a mathematical function of torque. The good news is, Superformance still can turn up the wick for production cars.

Not that it really needs to. The MKIII-E Cobra is already nuts, in a way even gas-powered Cobras aren't. Even 289 Cobras feel ridiculously overpowered, like a bathtub with a V-8. This one has full torque (of whatever quantity Superformance settles on) at any and all rpm, making it an absolute monster in a straight line.

Even with instantaneous torque available, the electric motor doesn't blow the rear tires off the car. That's mostly because Superformance and GoTech wisely fitted it with Nitto NT555R street-legal drag radials. Even cold, the Nittos have so much grip you'll just push the locked front tires along if you try to do a brake stand; the only way you're making smoke is with a rolling burnout, and that's not something to be taken lightly in this car.

There's still no traction control. No stability control. There are no bumpers on this bowling alley. You take aim, wing it down the lane, hope you don't end up in the gutter, and let the pins fall where they may. Just be ready to back out of it, because by the time you really break the rear tires loose, you're already approaching freeway speeds and any crown in the road will make the rear end walk. Don't try to be a hero and drive through it. Just back out—before you back into a tree at 70 mph.

Drag radials though they may be, the NT555Rs have a ton of grip, and you can absolutely whip the Superformance MKIII-E into a corner if you're brave enough. Thing is, this is still a replica of a 70-year-old car; the cowl shake is hilarious at speed. There are no windows. The doors are hollow, backless shells, and the lap belts and bucket seats (true buckets with no headrests) are hardly the pinnacle of automotive safety technology. This prototype doesn't even have the optional roll hoop behind the driver's seat. Hell, it still has the massive transmission tunnel that forces you to sit twisted in the seat with your legs pointing off toward the front-left tire, even though the transmission is now integrated with the motor in the trunk.

Because of all this, rounding a good corner feels like a hair-on-fire adventure at any speed. Just following our lead-footed photographer in her rental Corolla down a good road was a wild ride. When there's nothing but paper-thin glass and bodywork between you and the world, the sensation of speed and the threat of danger are duly elevated. With this kind of instantaneous acceleration available, if you're not careful with the pedal, the thought this car could really get away from you is always present.

Although it's clear the Superformance MKIII-E Cobra is capable of so much more, it's equally clear you'd want to wear a helmet, minimum. Don't skip arm day, either, because it employs a manual steering rack despite the fancy electronics under the hood. Really, the only difference between this and a classic Cobra is this one is faster and quieter.

That right there is the draw. The Stadlers say they were stunned by customer interest in an EV version of their cars, so much so they're working on electrifying their Daytona Coupe and GT40 replicas, too, and making the Daytona Coupe a dual-motor all-wheel-drive model. This from guys with gasoline in their blood.

"I was one of those guys totally against electric cars," Ashton Stadler says in Superformance's marketing materials. "I said I wanted to die never having driven an electric car."

What changed? Getting dusted by a Tesla in a stoplight drag in one of his V-8 Cobras.

"The power and performance, you cannot deny in these [electric] cars," he continues. "The acceleration is crazy, mind-blowing."

More than that, he realized, in addition to losing the race, he was making a ton of noise and attracting every cop in town. When he talked to customers, he heard the same thing. They were tired of pissing off the neighborhood every time they took their cars out. They were tired of attention from cops looking to write sound-ordinance tickets. They didn't want to get rid of their V-8 Cobras, they just wanted another option. They wanted quieter and faster.

Of course, you must have money. A Superformance MKIII with a 427 V-8 goes for about $110,000; the MKIII-E will sticker for something like $180,000 when the first cars are delivered. Part of that is because the chassis must be shipped to GoTech for the motor and battery install.

Before customer cars start rolling out, though, there's still work to be done. Right now, the 31.2-kWh battery is good for about 100 miles of range, and that's not enough. The goal is to get it up to between 150 and 200 miles, which will involve more batteries tucked here and there, perhaps in the now-empty enormous transmission tunnel. The company also wants to integrate DC fast-charging capability so you can stop at a public fast charger to top up without waiting hours for a Level 2 charge.

More important, the Superformance MKIII-E Cobra proves hot rodding's future is alive and well in the electric age. It even follows the tried-and-true Shelby formula of stuffing a ridiculously powerful motor in a little British coupe, and it's hardly sacrilegious as Carroll Shelby oversaw the development of an electric-car prototype before his death in 2012.

If you're an old-school enthusiast ready to flip the switch to EV hot rodding—and if you have a small house's worth of money to burn—you should put your name down sooner rather than later. Thanks to the fact the Superformance MKIII-E Cobra uses the same chassis and body as the standard MKIII, the backlog of orders for gas-powered cars means it'll be September 2022 before the first MKIII-E reaches a customer. The good news is, that's plenty of time to make it even more bonkers. 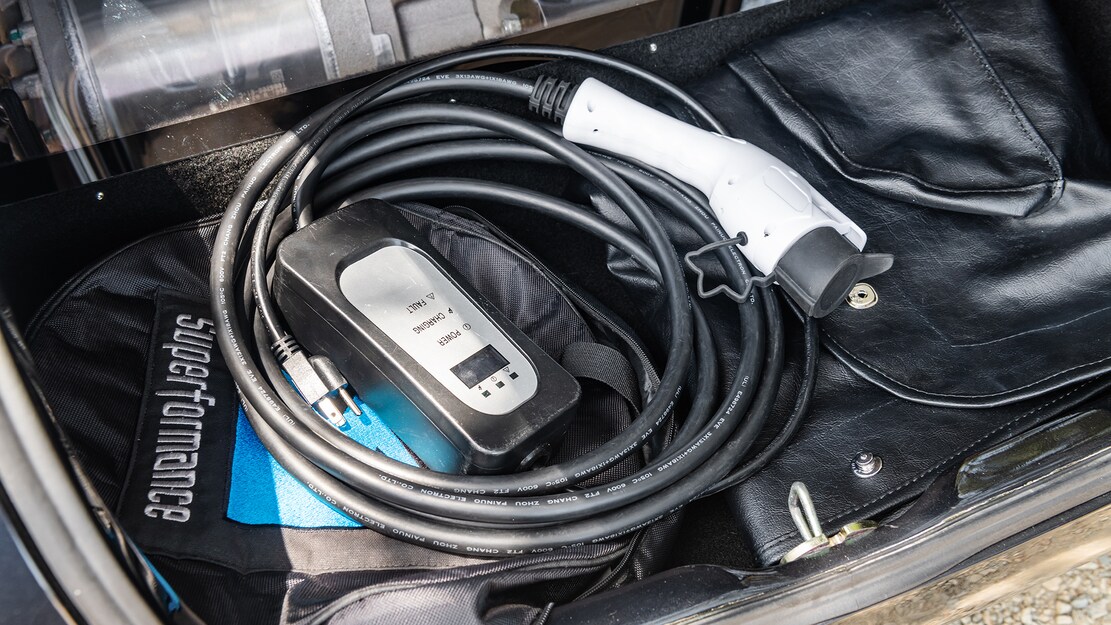