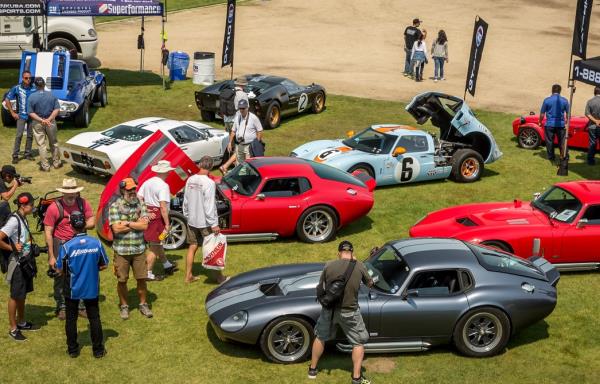 “Monterey Car Week?” It is one of the best weeks of the year and this year was certainly no exception!

For Superformance out car week began early on Tuesday when the cars and trailers were packed and left from our Irvine, CA headquarters for the tip to Monterey. While most of our cars were securely parked in the trailers we decided to drive three of our cars up, – a Superformance MKIII, Shelby Daytona Coupe and Superformance GT40 MKI. We headed straight to Mazda Laguna Seca Raceway to place the trailers for final setup at the track before heading to our first event at Folktale Winery & Vineyards in Carmel-by-the-Sea. Thank you Tim Suddard from Classic and Grassroots Motorsport Magazine and Hagerty for hosting an incredible event filled with good wine, food and incredible cars! We thank them for the generous invitation and for having us and our cars at the event, which was a great way to spend our first evening.

Wednesday proved to be a busy day as we set up at Mazda Raceway, so far this was our biggest display ever. We also had a press drive by www.nobraking.com.

Later we attended McCall’s Motorworks Revival at the Monterey Jet Center where one of our GT40s was front and center greeting guests on arrival. During this event Baume et Mercier presented Allen Grant, Dan Gurney, Rich MacDonald (son of Dave MacDonald), and Peter Miles (son of Ken Miles) a Baume et Mercier Shelby® Cobra 1963 limited edition watch. Bob Bondurant and his wife Pat were also present at the event having already received one of these specular watches. At the booth an aluminum 289 FIA was on display. Superformance are currently developing the fiberglass FIA that raced at Seabring and Shelby will be offering a few limited editions to match the watches.

Thursday really started to heat up as we had a full day at Mazda Raceway, combined with press events, and the first of the Shelby VIP Experience events we were fortunate enough to support with Team Shelby. There was a constant flow of activity at our Mazda Raceway display. We had about 20 cars on display and a number of Superformance owners joined us with their cars soon filling in the lawn in front of our display. We continued with press drives by Car & Driver and CNN Style/Maxim, so look for those articles soon.

Later on Thursday evening Ashton, Luis and Bryce headed to Baja Cantina where we displayed some of our cars and mingled with other car owners eager to show off their cars. Lance, Deborah, Doug, Marissa, Todd and Bob headed to Pebble Beach for a Team Shelby VIP Cocktail Party in Pebble Beach. We arrived in appropriate style at Shelby VIP Cocktail party with our MKIII sporting Goodyear Billboard tires, MKI GT40 in Gulf Livery and a beautiful CSX9000 series Cobra Daytona Coupe. Our MKIII and GT40 were set up next to a 50th Anniversary Shelby MKII GT40 in Amon/McLaren livery and our Daytona Coupe was slotted in next to one of the CSX9000 50th Anniversary Coupes with a beautiful polished aluminum finish with brushed aluminum stripes. It was a great evening by Team Shelby which also featured some fantastic Shelby Craft Beverages!

Friday was another day full of time at the track, working with the press and other events. It was another busy day at our display at Mazda Raceway, and a few of us peeled off in the morning to participate in the Team Shelby Big Sur Cruise with a MKIII and a Daytona Coupe. Approximately 35 people participated in the cruise which culminated with a fantastic lunch hosted by Team Shelby at the Rocky Point Restaurant overlooking the Pacific Ocean.

Friday also included two more press drives with Thrillist and another drive for CNN Style/Maxim. We also had to begin setup late Friday for Concourso Italiano on Saturday.

Saturday was the culmination of a very busy schedule with displays at Mazda Raceway as well as the Black Horse Golf Club for Concourso Italiano. The Team Shelby VIP Experience continued at Mazda Raceway with a private tour of the Ford Garage, a legends autograph session with Henry Ford III, Edsel Ford II, Allen Grant, Peter Brock, John Morton, Dan Gurney, and Aaron Shelby followed by lunch with these amazing people!

Concourso Italiano was amazing as well with the best of Italian automobiles as well as other marques. Our display at Concourso included almost the entire lineup of Superformance/Shelby cars including 289 Slab Side, 289 FIA, MKIII 427 S/C, Daytona Coupe, GT40, and Caterham Seven. The display was buzzing from start to finish!

Sunday was our final day of activity, with most of if focused at Mazda Raceway for the final day of racing. There was still plenty of activity in the display at the track. One of the very special guests we had in the display all week was John Sadler and is beautiful wife Carol. John is from Safir Spares and was an incredible source of history on the GT40 as well as information on the Superformance GT40. One of our favorite moments of the week with John was when he overheard someone refer to the Supeformance GT40 as a “continuation” car. He quickly ran over and very politely explained that the Superformance GT40 is neither a replica or continuation, simply a GT40, further explaining that the car is patterned after and built almost to the exact specification of the original cars, has original GT40 chassis numbers and all Superformance GT40s are included in the GT40 Registry. It was such a pleasure to have John and Carole with us for the week!

Of course the crown jewel for Car Week is the Pebble Beach Concours de Elegance. This year was very special for us as the Pebble Beach Concours celebrated the 50th anniversary of the GT40’s 1-2-3 sweep of the 1966 24 Hours of Le Mans. The display was as impressive as it gets, with every significant race-winning GT40 present for the event. Ford also brought out a special edition of the new Ford GT that pays homage to the 1966 Le Mans winning car of Chris Amon and Bruce McLaren. The car is stunning in any color, but we are particularly fond of this livery on the car. It was certainly and once in a lifetime experience to see all these amazing cars together!

Sunday night was time to pack up the displays, cars and trailers for the trip home on Monday. Once again, most of the Superformance cars were carried home in the trailers, but we did drive two Daytona Coupes and a MKIII home on Monday to better enjoy the beautiful California scenery and weather on the trip home. Thank you to all our customers, friends, supporters, and partners who came out to visit and participate in our events.

We look forward to an even bigger and better event next year!