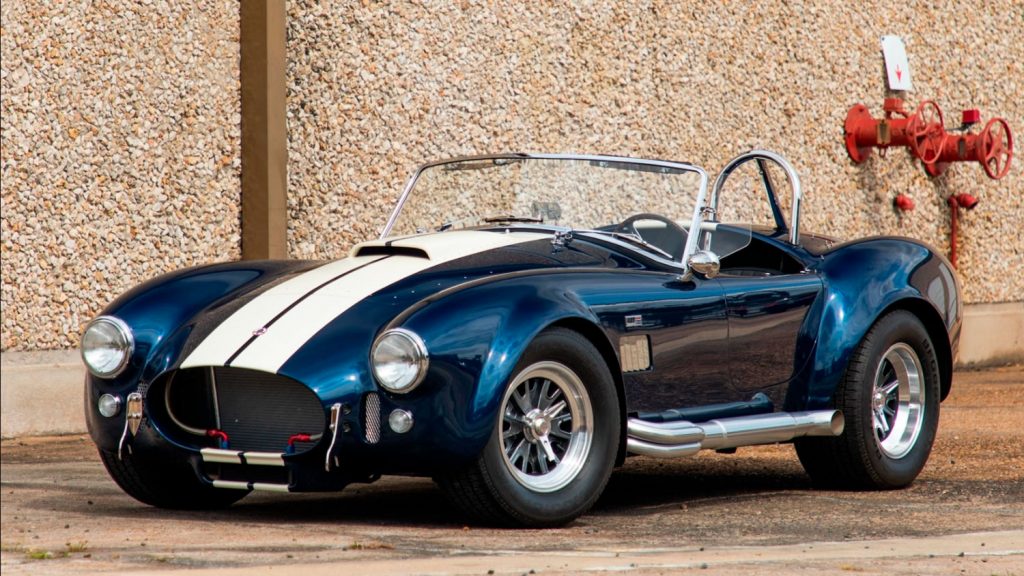 The Shelby Cobra is one of the most iconic sports cars ever built. Envisioned by famed racer, chicken farmer, and huckster Carroll Shelby, the Cobra was an AC Ace stuffed with a Ford V8. Yes, we know, there is much more to it than that, but for the purposes of brevity, we will paint with a broad brush. The Ace was a tube-framed car with a hand-formed aluminum body, which made for a very light platform. Combining that low weight with Ford V8 power made for scintillating performance indeed.

The Shelby Cobra would become a dominant force in sports car racing in the early and mid-1960s. That success would lead to the construction of the Cobra Daytona coupe, designed by the legendary Pete Brock, to overcome the Cobra roadster’s aerodynamic shortcomings on long course tracks. The Cobra roadster was aerodynamically limited to around 150 to 160 miles per hour, but the slippery Daytona would top 190 miles per hour.

It became obvious that Carroll Shelby and his rag-tag group of international hot rodders, led by genius fabricator Phil Remington, were applying mechanical and design magic to their competition cars. Shortly thereafter, Ford needed help with its problem-plagued GT40 program, convincing Carroll Shelby to spearhead the program. That resulted in Shelby and company transforming the GT40 into Ferrari’s worst nightmare.

Decades later, the Shelby Cobra and the other cars involved in this colorful period of road racing history have become out of reach for the average automotive enthusiast, with the original Cobras now all being six-to-seven-figure cars. The Cobra Daytona coupes (there were only six constructed), when they do trade hands, do so for around $10 million or more. A total of 87 units of the Ford GT40s were built, and those sell for $3 million to $10 million. However, there are plenty of enthusiasts who would love to own and drive one of these mythic beasts, and that created an opportunity.

That brings us to our feature Superformance Shelby Cobra, which was seen in some of the Shelby American LAX hangar scenes in Ford v. Ferrari and that sold at the Mecum Auctions in Kissimmee, Florida in January.

The Shelby Cobra interior is all business. The black leather interior with black carpets shows no sign of use. The dash is peppered with Smiths gauges, with the tach straight ahead of the steering wheel on the right of the column. The turn signal stalk is on the right side of the column. The reverse-wrap speedometer is just to the right of the wheel and down a smidge. The shifter looks odd with its forward cant, but falls immediately to hand when driving.

After its movie duties were completed, the Shelby Cobra wound up being raffled by The Cobra Experience Museum in July of 2020. The winner was renowned Ford and Shelby collector Gary Thomas. The cobra, which was accompanied by a Superformance Certificate of Authenticity, sold for $209,000 at Kissimmee.