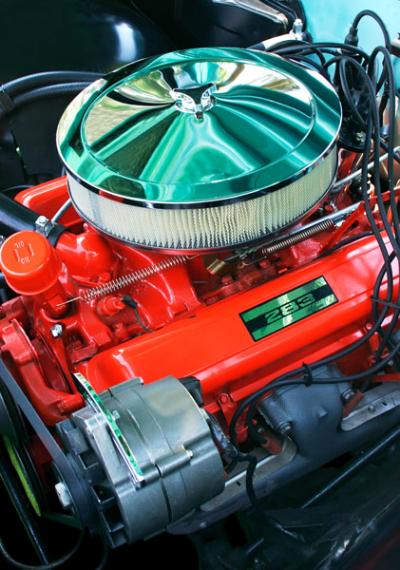 The Green Rod project, a collaboration between SEMA member companies and the association, has yielded a retrofit kit of emissions-related aftermarket parts capable of meeting 2008 California smog-check standards. The kit was tested on a mid-80's fuel-injected 5.7L Chevy small block, a descendant of the venerable 283 pictured above.

SEMA announced that a bill has been enacted into law in California to require the Department of Motor Vehicles (DMV) to develop and administer a vehicle registration amnesty program, which would be in effect from January 1, 2010, until December 31, 2010. The program would apply to vehicles that were previously registered or classified incorrectly.

Under the new law, the DMV would be required to grant amnesty from prosecution to a vehicle owner if certain conditions are met, including the owner filing a completed application with the department.

Over the years, California's complex vehicle registration laws have created continued confusion among state hobbyists and those charged with applying these laws at the ground level. The result has been that certain specially constructed hobbyist vehicles (including kit cars, customs and street rods)—estimated at 70,000 by the California Attorney General—may be erroneously titled or registered.

SEMA has worked with the California State Legislature, Attorney General’s office, Bureau of Automotive Repair, DMV and Air Resources Board to find a reasonable solution that will address the interests of all parties, including enthusiasts in the hot-rod market segment, so that specially constructed vehicles can become properly registered and titled in the state.

"Given the looming threat of prosecution that owners of illegally titled specially constructed vehicles were facing, our charge was to find an equitable solution that provided these owners a reasonable period of time to voluntarily retitle their vehicles and pay appropriate back taxes and fees," said SEMA General Counsel Russ Deane.

"The remaining element of the solution involves reaching an agreement with state regulators on a process by which specially constructed vehicles that have been accepted into the amnesty program can reach achievable smog-check compliance. In addition, we must develop provisions that will accommodate new vehicles being built today for future titling and registration, specifically those that are not among the 500 vehicles annually to which California provides certain smog-check exemptions. On these issues, substantial progress has been made."

In alliance with member companies and under the banner of the "Green Rod Project," SEMA has been able to configure a "retrofit kit" of emissions-related aftermarket parts capable of meeting 2008 California smog-check standards. The retrofit kit was installed on a high-mileage '80 El Camino fitted with a '86 fuel-injected 5.7L engine. The 5. 7L 350ci displacement small-block Chevrolet V8 engine is one of the most widely used engine platforms for all types of specially constructed vehicles.

"Transitioning from a carbureted environment to a fuel-injected environment while utilizing the latest controller technology and emissions parts upgrades available from the specialty-equipment industry resulted in dramatic and unprecedented reductions in tailpipe and evaporative emissions on the test vehicle," said SEMA Technical Consultant Jim McFarland, who oversaw the Green Rod Project.

"In addition, the retrofit kit actually improved performance and drivability when compared to a carbureted engine and does not limit power in the full-acceleration mode."

The vehicle's owner can choose whether the inspector will certify the vehicle model year by body type or by the engine model year. Only those emissions controls applicable to the model year and that can be reasonably accommodated by the vehicle are required. Recognizing that the demand for the exemptions greatly exceeds the supply, the SEMA Green Rod Project is seeking to provide a solution for vehicles that do not receive one of the 500 annual exemptions.