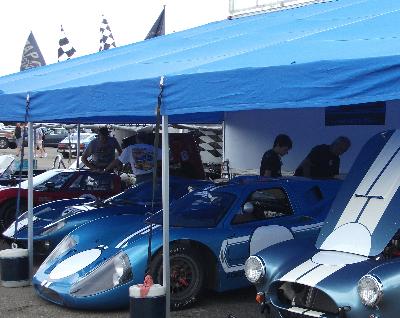 Superformance was well represented at the Glenora U.S. Vintage Grand Prix at Watkins Glen on the 9th of September 2011.

The event kicked off with the Grand Prix Festival held in downtown Watkins Glen. The "old course" recreation held on Friday afternoon featured a Superformance 289 FIA MK II and two GT40's running the 6.6 mile public streets course that was utilized from 1948 to the early 1950's. Our Superformance entrants followed the historic course over a stone bridge and railroad tracks to re-enact the earliest days of U.S. road racing.

On Saturday and Sunday, Rick and Ross from Time Machines Motorsports located in Clarence Center New York, represented Superformance in the vendor area along with several Superformance MK III's a MK II "FIA", two GT40 "R" race cars and a "Gulf Heritage" MK I GT40. On hand to assist with technical advice was Dennis Olthoff an installer who is also a well know racer. We were also joined by a number of owners with their cars.

As Sunday came around the attendees were treated to three quick laps of Superformance cars driven by Dealers, Drivers and Owners led around the 3.3 mile track by the Watkins Glen Pace Car.