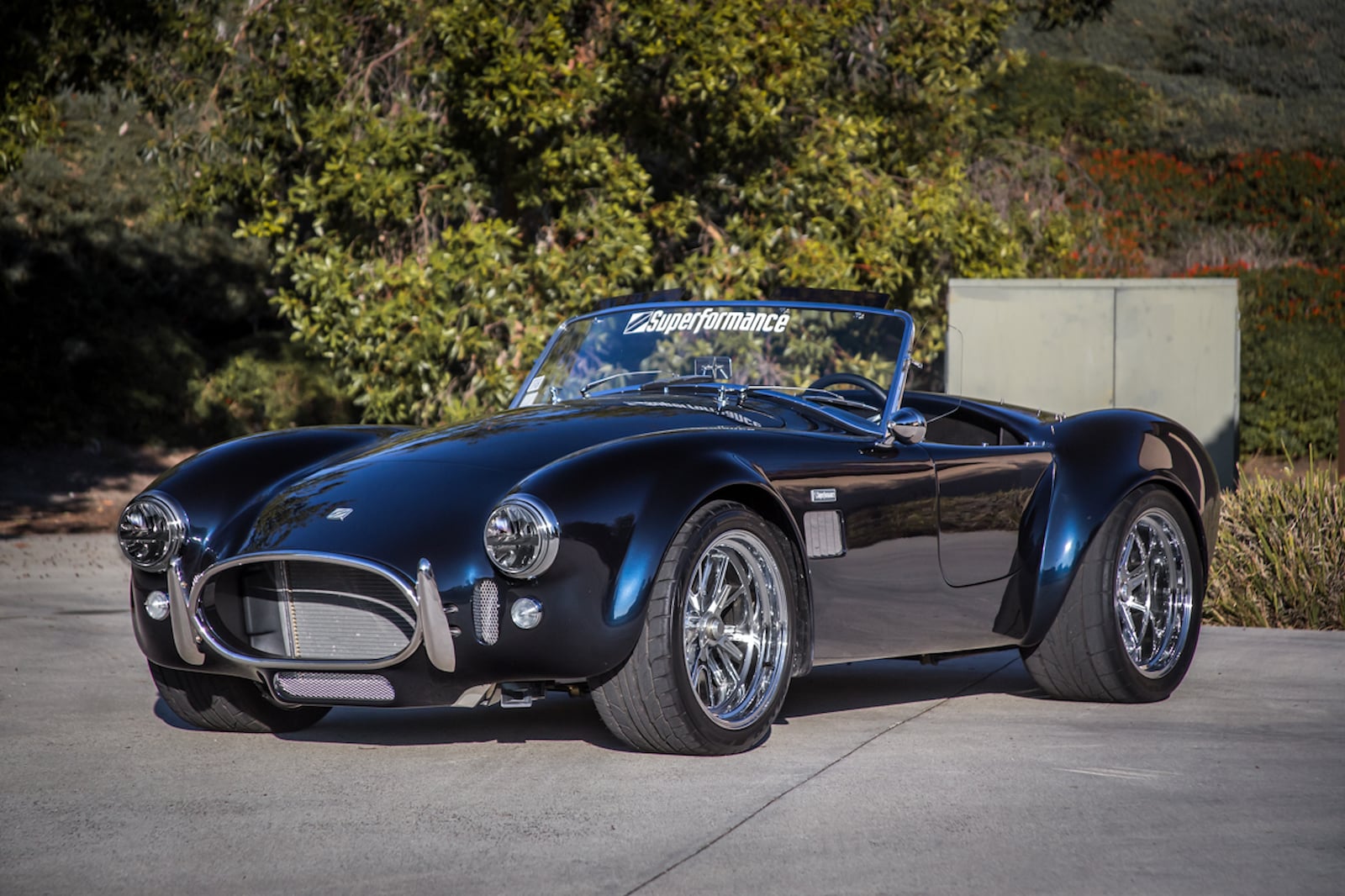 More bite than even Carroll Shelby could have imagined.

According to lore, Carroll Shelby named his small and powerful sports car the Shelby Cobra because it would bite you hard if you didn't respect it. The final street model, the 1965-1967 Mk III Cobra, was built with a 7.0-liter Ford V8, making up to 505 horsepower in Super Snake form.

Nowadays, if you want to buy a new Cobra, you get in touch with Superformance for a licensed Shelby continuation model. The company has its own line of Cobras, but there's plenty of flexibility to build your perfect dream car. Superformance likes to experiment, and it's an experimental model we checked out at the company's Irvine, California warehouse.

Dubbed the Superformance Mk III-E Cobra, instead of a V8 under the hood, this has an electric drivetrain. And before you jump to the comments and start using words like "blasphemy," remember that this is an experiment and, instead, appreciate that this is a lightweight sports car with around 1,000 lb-ft of torque available instantly and has no traction control. This is a car that won't just bite you if you don't respect it; it'll serve you up to the nearest tree with some fava beans and a nice Chianti.

Although the word timeless gets thrown around, very few cars genuinely stand the test of time aesthetically. The Cobra is one of them, however, and Superformance's treatment of the exterior with a two-stage paint finish over laminated fiberglass bodywork shows it off to the fullest. The roadster model here has the roll-bars deleted and has full roadster bumpers fitted. It's also had the hood scoop deleted, and the Monza style catch-release fuel filler hides the plug for charging. Typically, a Superformance car will come with 16-inch wheels, but the MkIII-E runs on an 18-inch staggered setup to house the super-soft 275/35-18 Nitto tires on the back. Trust us when we say, even those aren't sticky enough.

Despite the modern upgrades, the Cobra is still delightfully old school. If you want to look at the high-tech batteries, you have to turn two release handles to lift the hood. The tiny wing-mirrors are actually mounted on the fenders, and the rearview mirror is mounted on the dashboard. 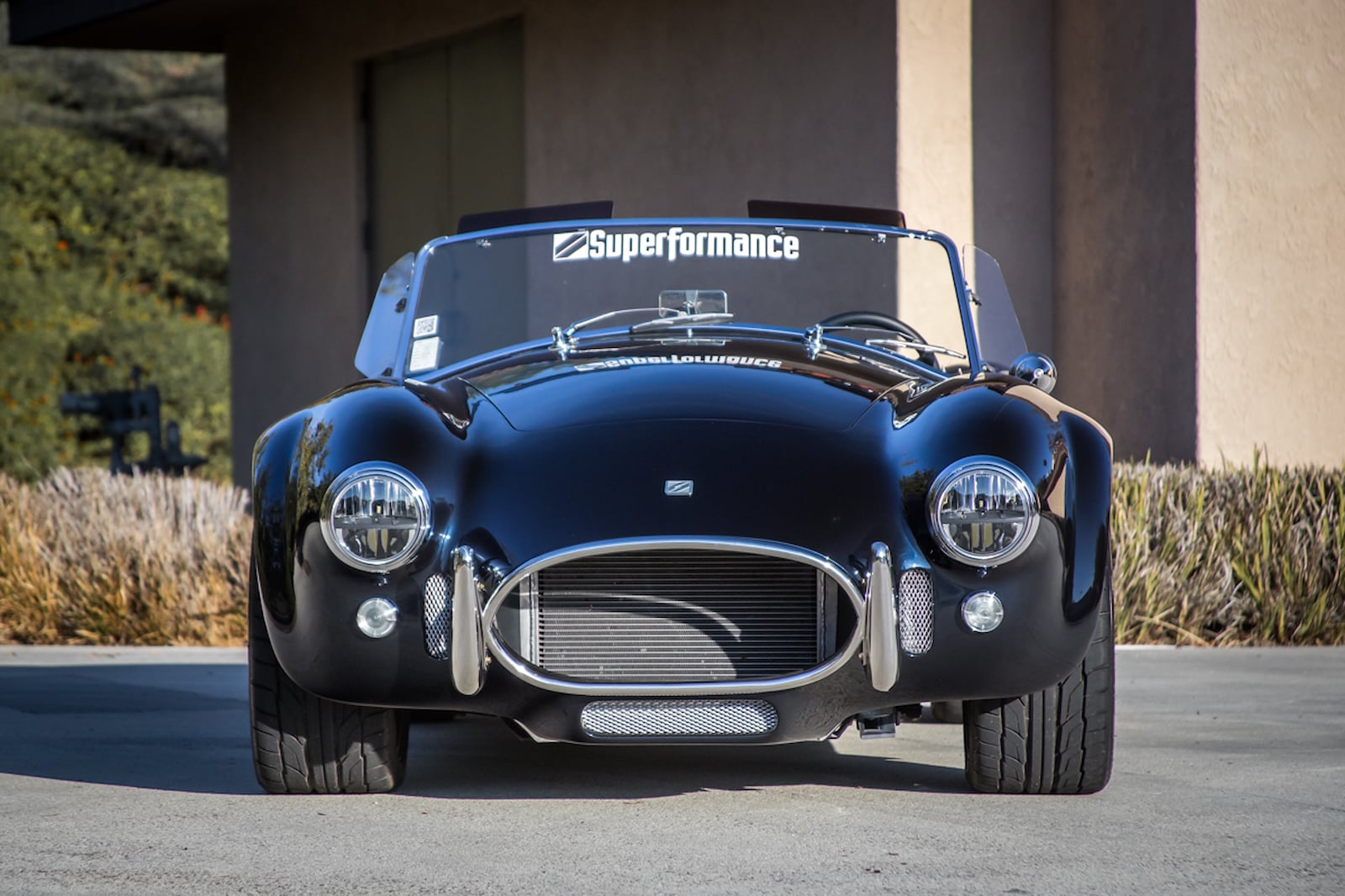 Superformance partnered with a company called Gotech Performance to create this experimental prototype electric Cobra. To keep the weight balance at 50/50, the batteries are under the hood where the engine would normally be while the motor sits at the back, viewable through a perspex screen in the trunk. If anything, weight distribution is better as it is lower and more central in the chassis. The batteries are two LG Energy 16-cell units combined to make a 32-kWh pack, while the motor is pulled directly from a Tesla Model S P100D. In its rawest form, that drivetrain created so much torque so quickly that the Mk III-E Cobra couldn't be controlled and would just shred a set of tires doing donuts. That's fun for a few minutes, but it's one-dimensional and prohibitively expensive fun. Now, the drivetrain is detuned to make "only" around 1,000 lb-ft of torque. If you can resist doing donuts, there are over 100 miles of range to play with. 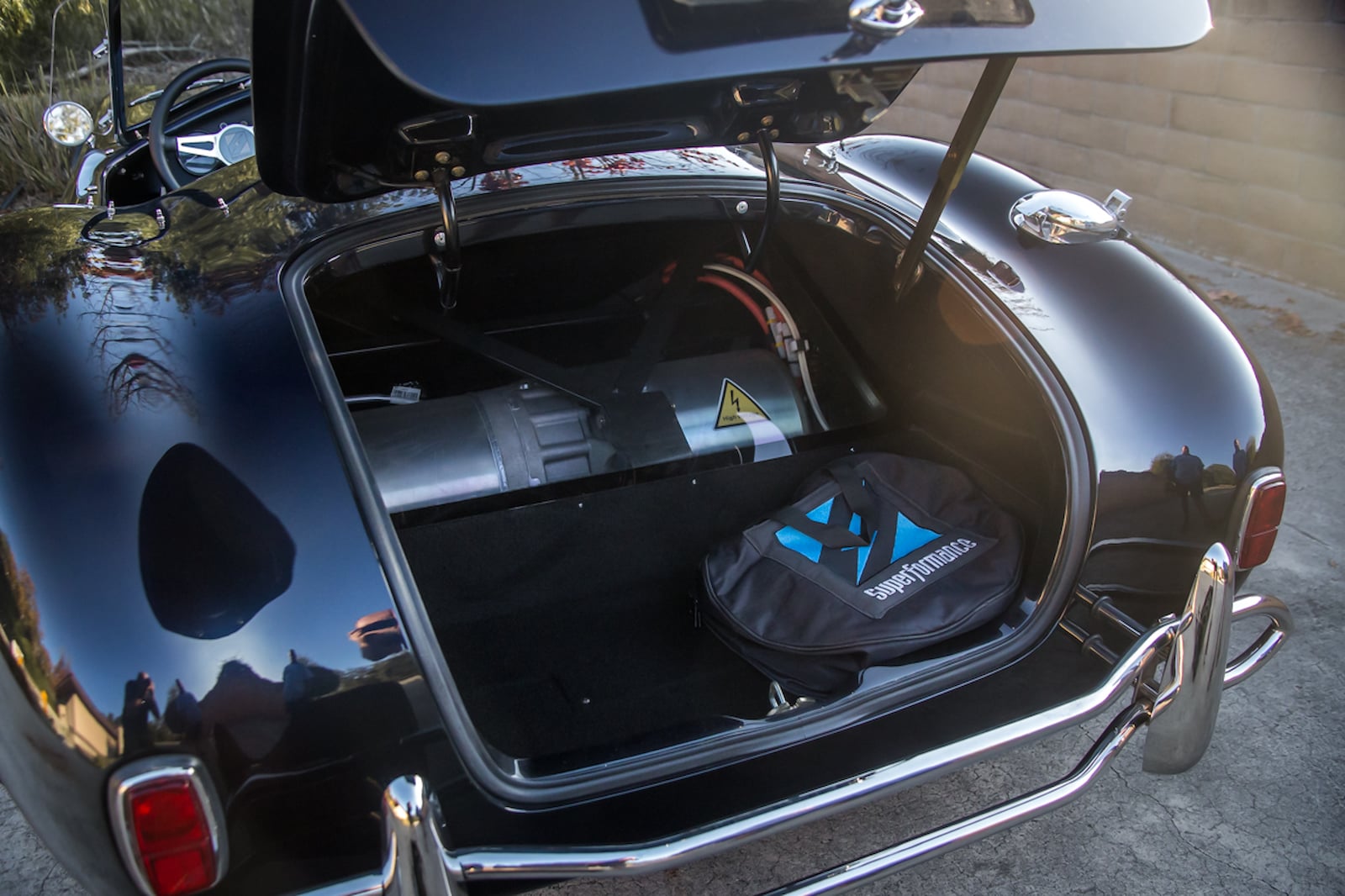 Despite cautionary words from Superformance's Ashton Stander about breathing on the throttle to get the Mk III-E Cobra out of the showroom, and having the lightest foot of the CarBuzz crew, this writer still managed to leave thick tire marks on the floor from the monstrous drag radials. It was the first warning from the car not to treat it with anything but the utmost respect, and thankfully only resulted in extreme embarrassment. That wasn't the only time the tires got lit up unintentionally, though.

We found a quiet stretch of road and gently eased the throttle on, and instead of a big grin and a whoop, there was a furrowed brow and a curse. All the warnings in the world can't prepare you for the on-switch you just flipped, dumping 1,000 lb-ft almost instantaneously to the tarmac. 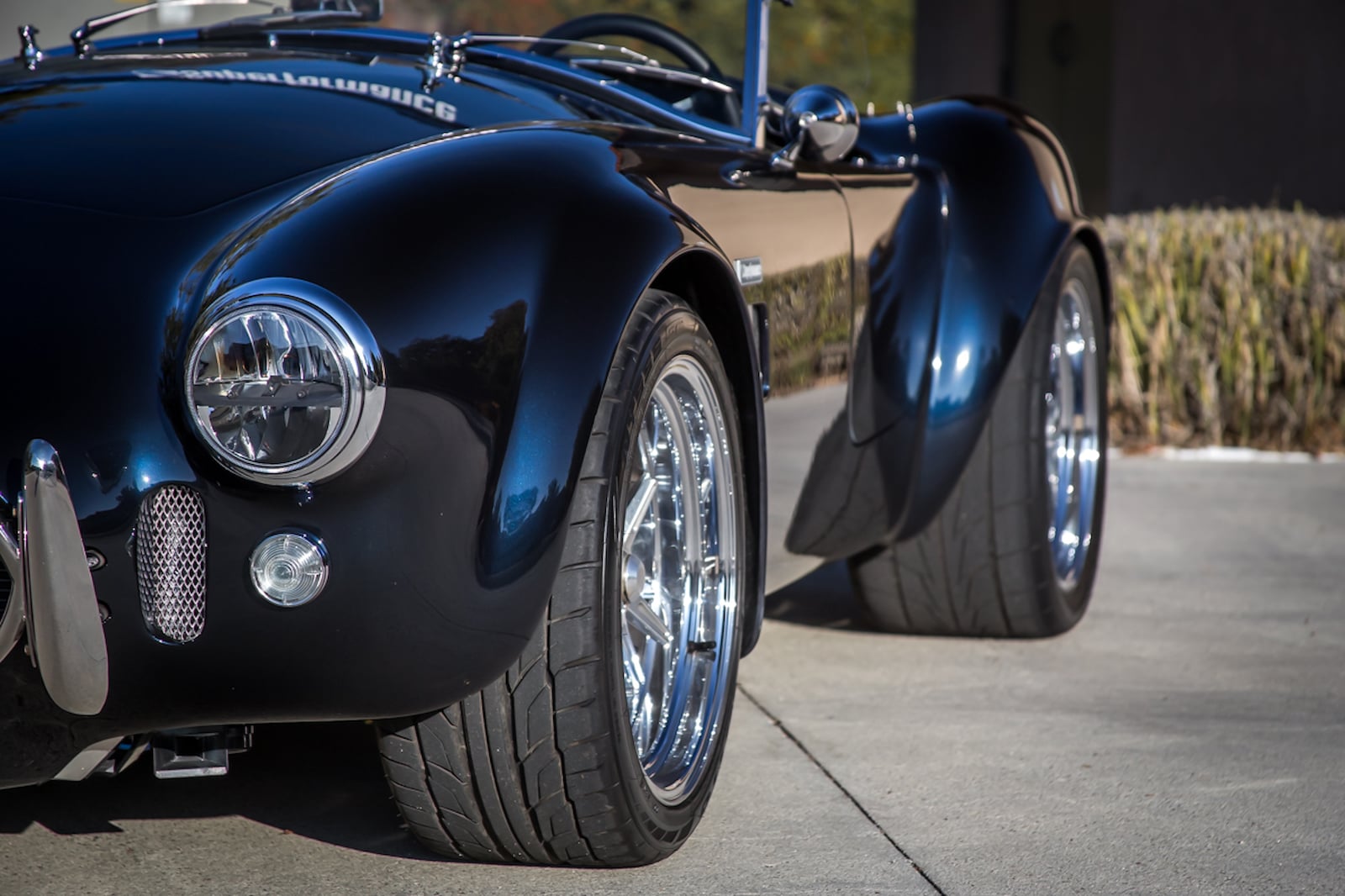 The warning Stander gave was that there's no aural feedback on how the tachometer is ramping up (it goes to 15,000 rpm), and the MkIII-E Cobra will start a burnout at any speed despite being on drag radials. While we didn't have the nerve to try that, we can confirm that with too much pedal, the E-Cobra easily wanted to break loose at freeway speeds.

A couple of measures of the throttle pedal later, and the grins came. Getting into the bends, and we have no shame in admitting there were no heroics in trying to apply the throttle while the wheel was anything but straight. Mostly, anyway. One over-ambitious application of power led to clenched buttocks and left tire marks down the road. Have no doubt; this car wants to bite you. It's possible a race car driver with cajones the size of basketballs could make it dance on a track, but we wouldn't want to try it without big run-off areas. 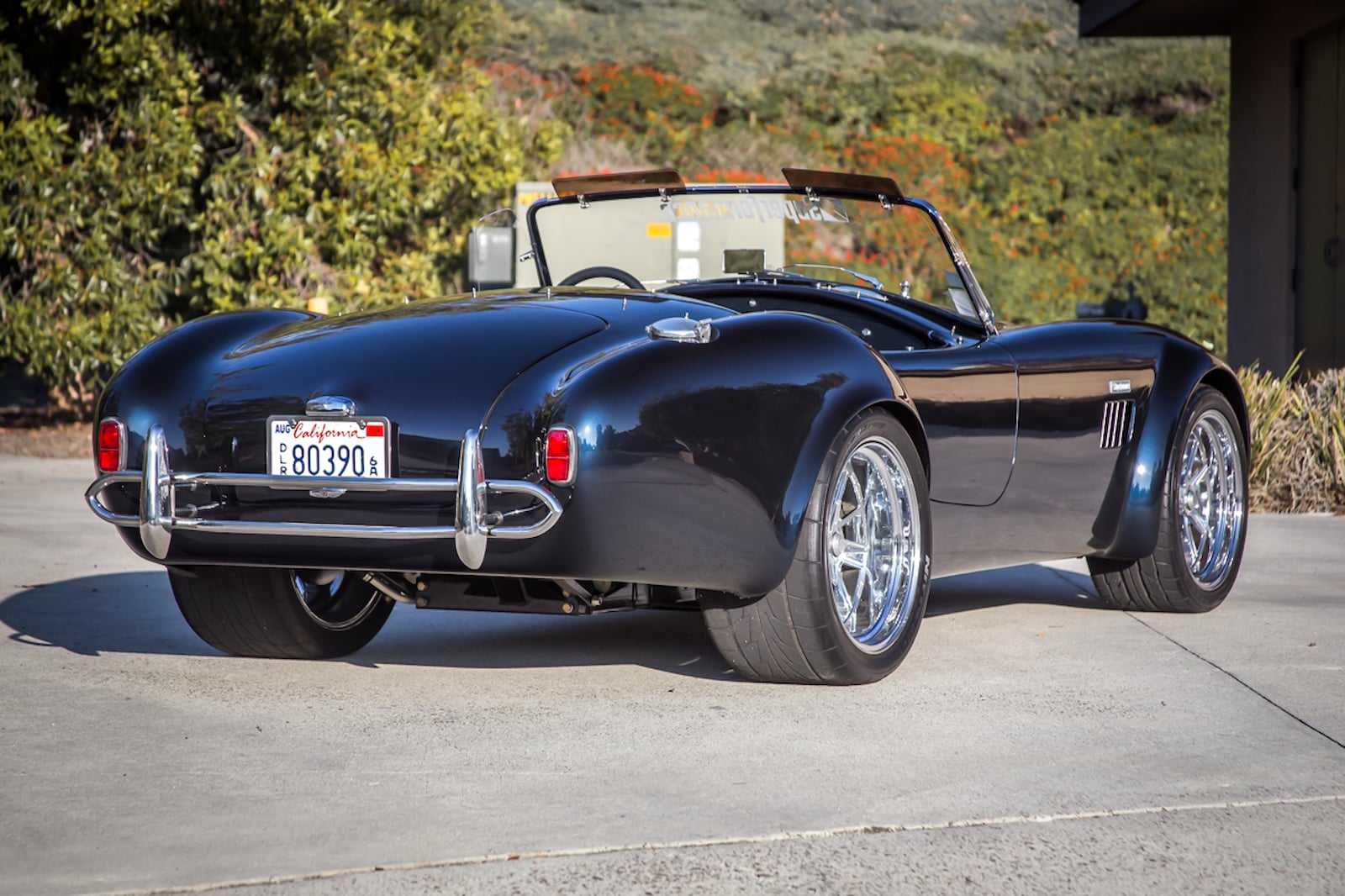 Fortunately, while the styling is vintage, the suspension and brakes are engineered with the full might of an electric powertrain in mind. The suspension is independent and custom-tuned using coil-over shocks and the brakes are power-assisted Willwood units that make light work of a relatively light sports car.

However, in and around town, Stander's recommendation of left-foot braking started to make a lot of sense. The handbrake is just that, and the car won't hold itself at a stop on even a slight incline. That aside, with the lightest of touches on the throttl, it was easy to drive it like a regular EV. Well, if that regular electric car was on massive super-soft tires and didn't have power steering. In fact, that's where one delight in driving the Cobra around the city lies; it's just fun to cruise in a beautifully built classic car with an electric drivetrain. The other delight is in just how stupid fast it is. 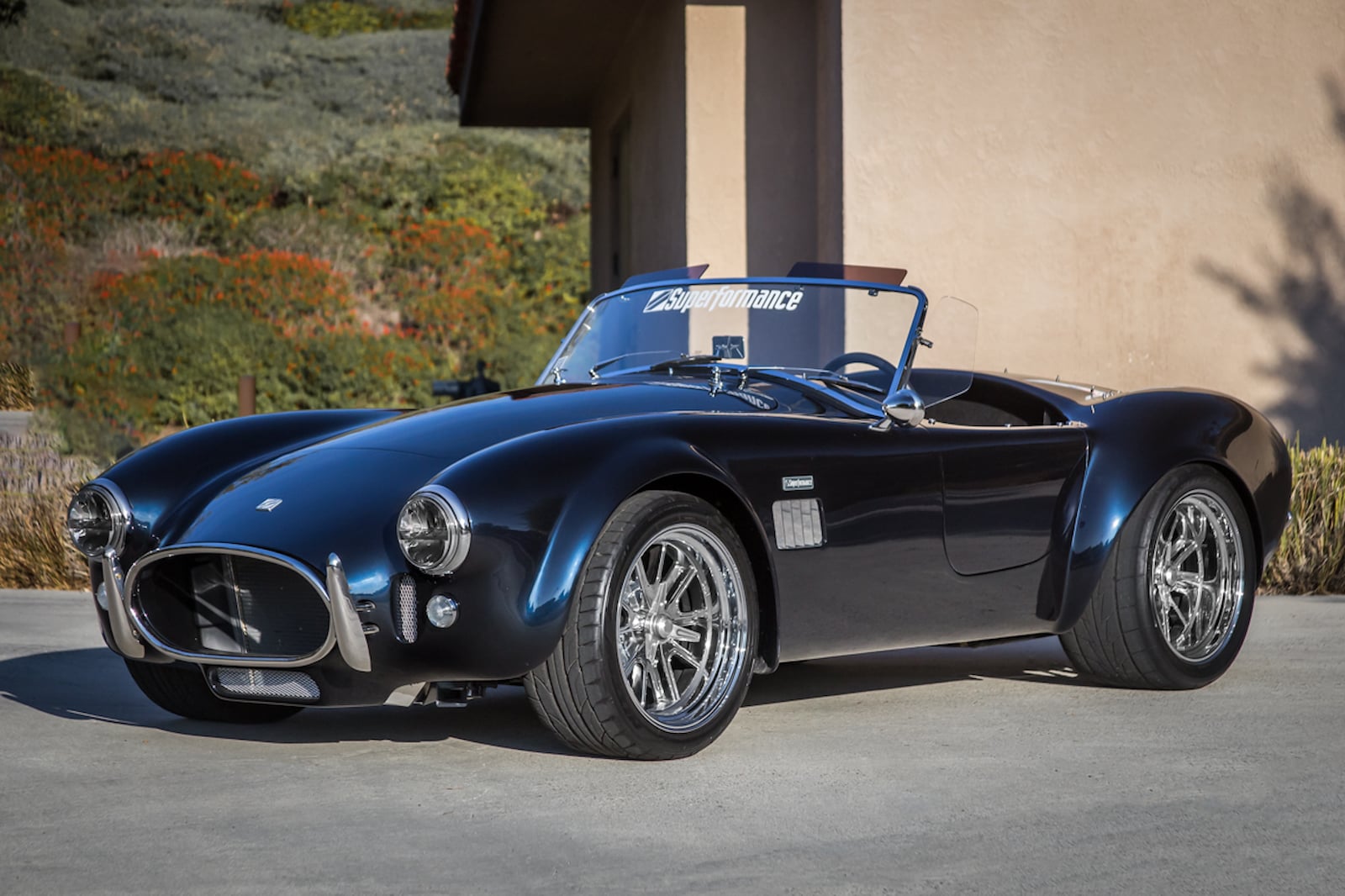 Let's not forget (in all the excitement of pure power in a short wheelbase package) that continuation and restoration models are what Superformance specializes in. Through an exclusive agreement with the late Carroll Shelby, Superformance's Mk III Roadster is a licensed Shelby product. Back in the day, to take the Cobra where Shelby wanted it to go, it needed a new chassis which was developed with Ford to create the Mk III version. Inside the Superformance Mk III are original-style pedals, catches, fittings, and latch-lock lap belts. There's also a 14-inch leather steering wheel and leather bucket seats. The cockpit doesn't look like it's going to be comfortable as it's tight, and you have to get your feet in the wheel well then lower yourself in. However, once you've settled, the natural driving position is perfect, and the seats supportive and glove-like. It's also clearly designed for taller people to drive as, even at six-foot-one, your reviewer slipped straight in, and his head didn't poke up over the height of the windscreen. 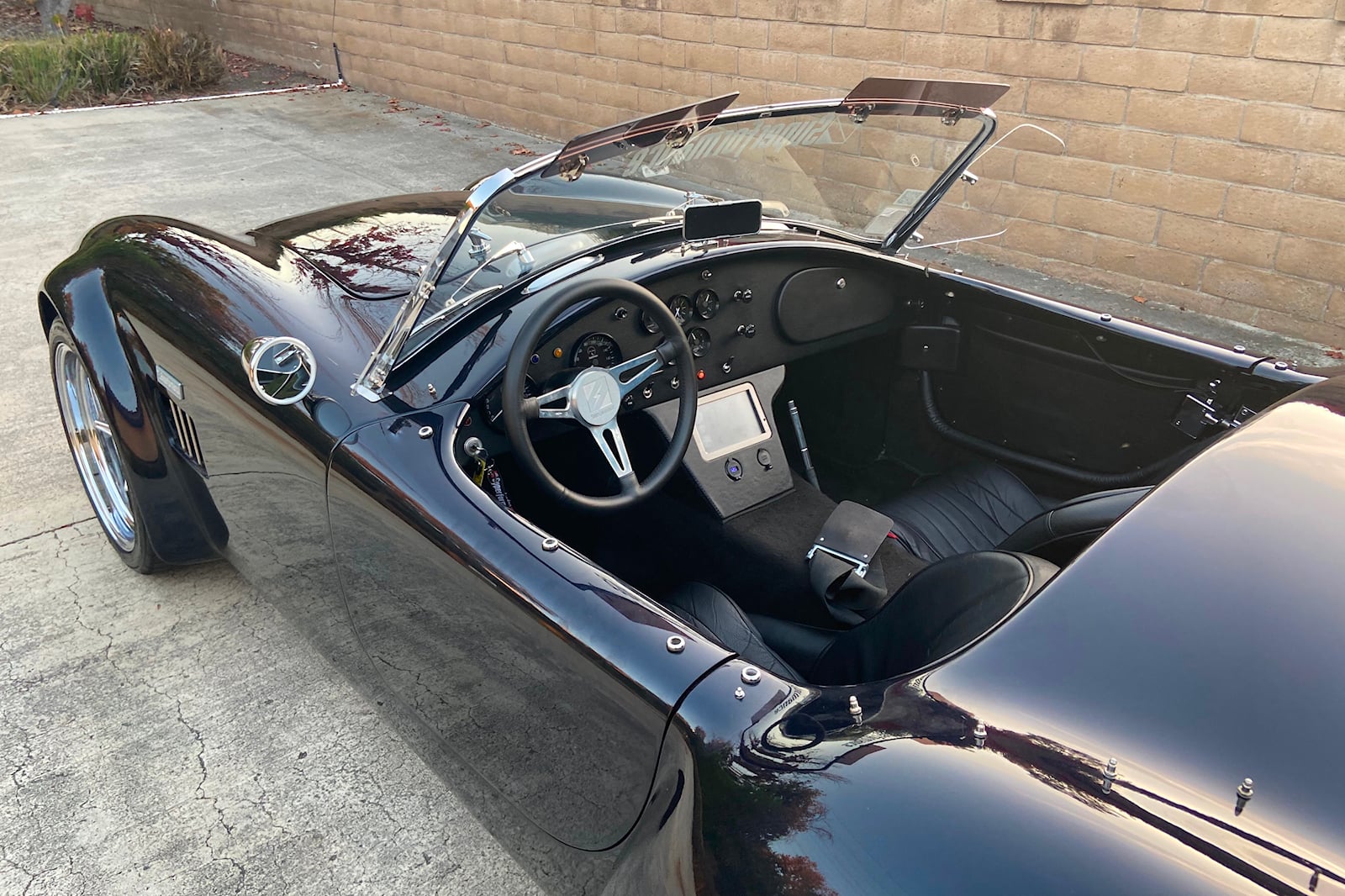 Normally, there would be a shifter on the transmission tunnel, but that's gone for the electric version and there's now a small screen for controlling the electric drivetrain. Touch buttons on the screen are used to select drive, reverse, and neutral, and that's all you need to control other than the manual parking brake. The only place where there's some getting used to is the old-school race-car positioning of the pedals, which are set to the left to clear bell-housings. There's no clutch pedal in an electric car, but the brake and accelerator are still close together. That would be perfect for rev-matching in a traditional car, but if Superformance was to build an electric model to sell, it would still be ideal if the footwell could be enlarged and the pedals spaced better with the idea of comfortable left-foot braking in mind.

The build quality looks fantastic, and there's remarkably little rattling or road noise without the sound of an engine to cover anything up. There's also little buffeting inside from the wind, which isn't even something to take for granted with modern-day roadsters or convertibles. 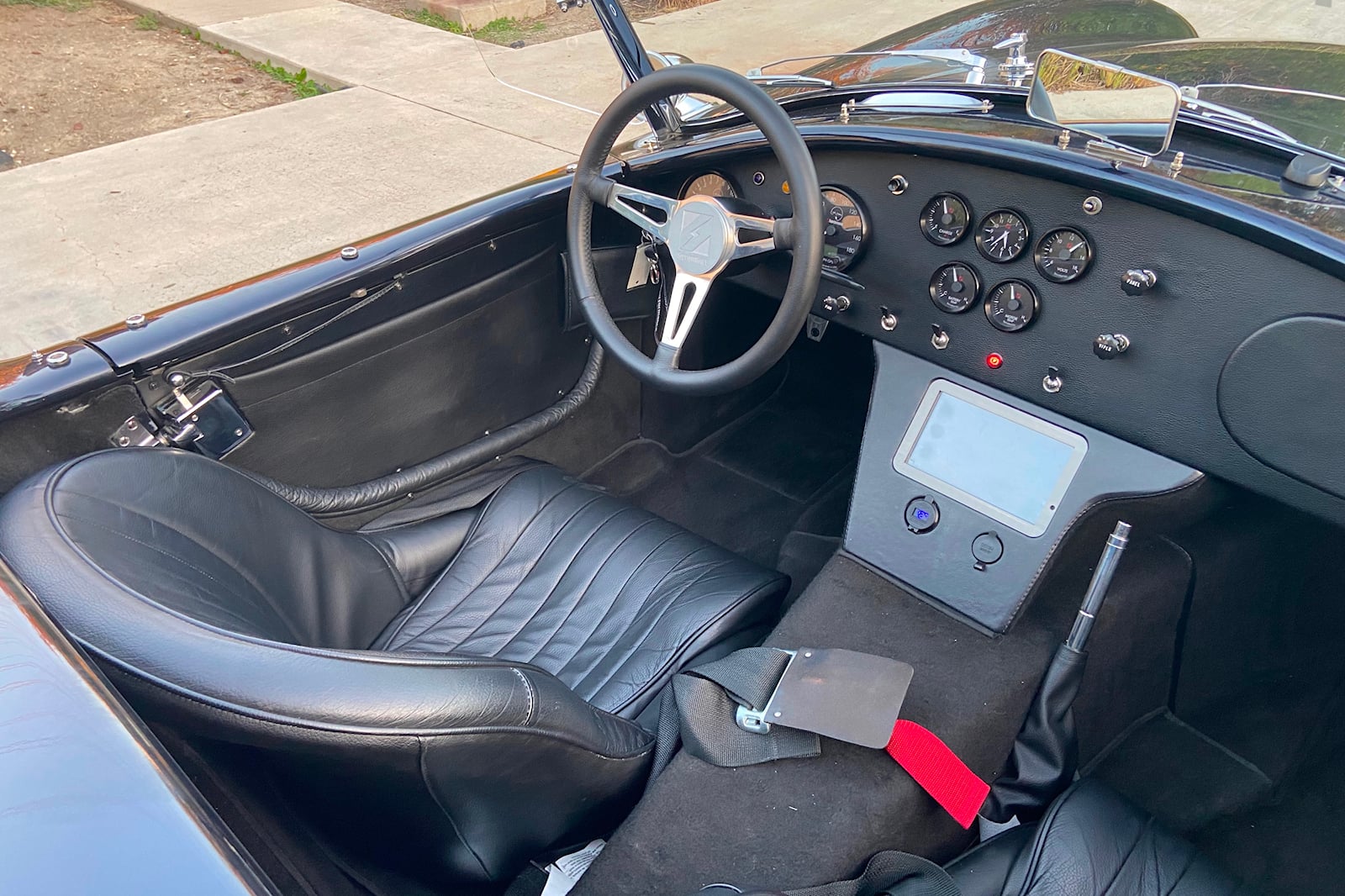 As a sports car for a windy public road, it's close to unusable unless you have zero fear and the practiced reflexes of a Formula 1 driver. As something to take to the drag strip to shut up the "there's no replacement for displacement" fools, it's exceptional, but it can be more than that. There's no doubt the chassis is excellent, and with a manageable drivetrain, it's a mind-bendingly good car for any enthusiast. Stander mentioned the idea is floating around to try the E-Cobra with a Mustang Mach-E drivetrain. The words "all-wheel drive" were also used.

We hope that the mad scientists get a chance to experiment some more. After all, when Carroll Shelby stuck a big engine in the small roadster, he didn't stop experimenting. And, if you really want some legitimacy for the idea of an electric Cobra, Shelby himself oversaw the development of one.

The market for electrified classics is out there, and as Lance Stander, CEO of Superformance, points out: "Enthusiasts are not giving up their internal combustion engines. They're just buying a roadster that will sit next to the ICE-powered vehicles in the garage." 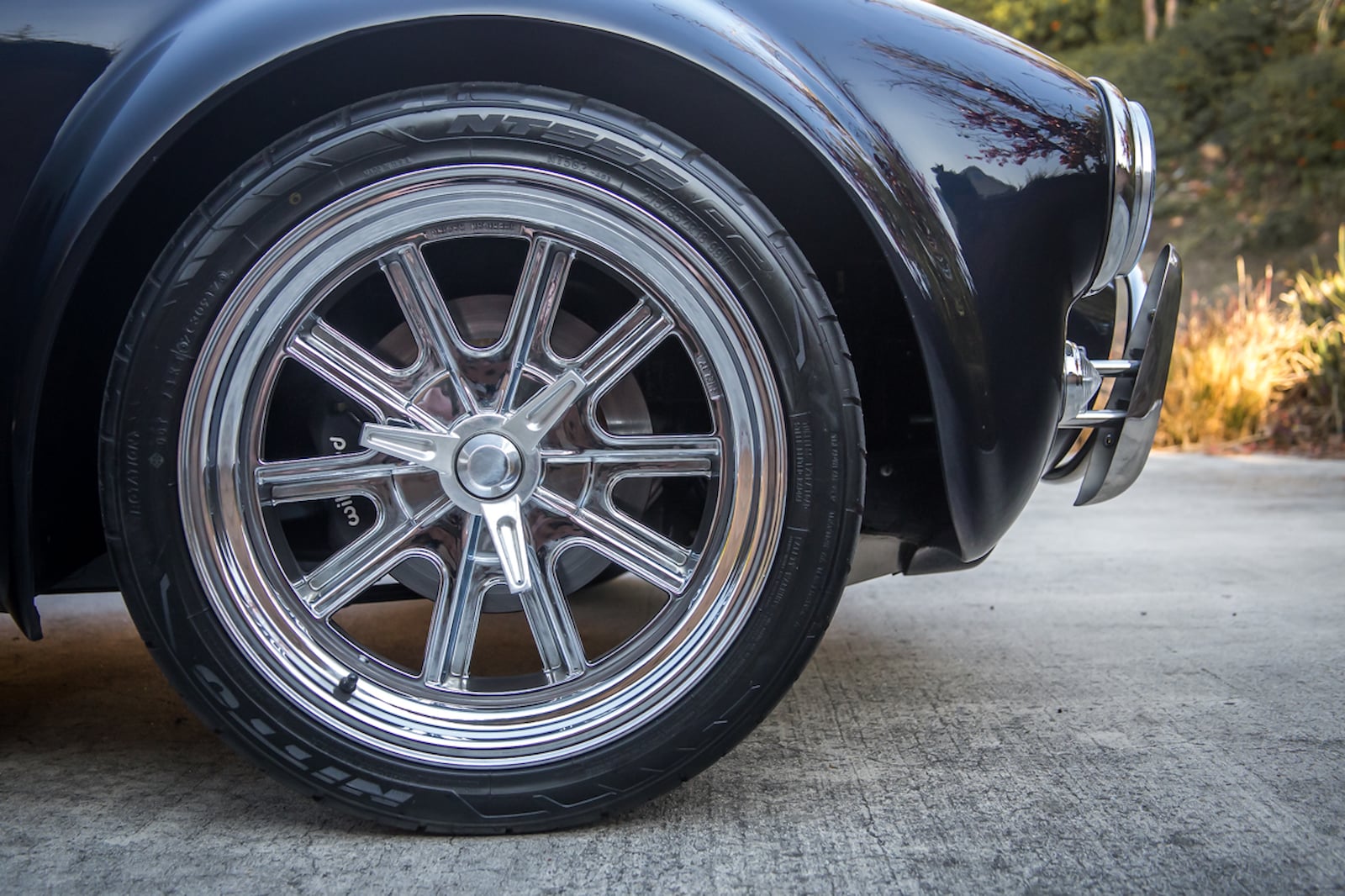