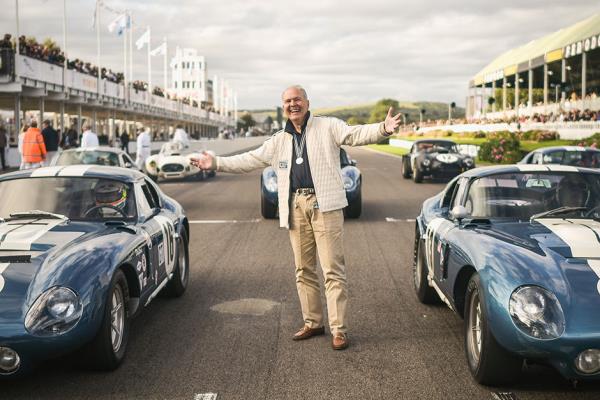 Six Shelby Daytona Coupes built in the 60’s arrived from all around the world to attend the Goodwood Revival. It was estimated that the total value of these cars was $25,000,000.00.

One arrived from Japan, one from Argentina, one from Germany and three from North America. Incredibly in the 50 years since their inception they have never all been together before. They made their way to the pit area where they parked re-creating the 1965 Sebring pit area.

A number of events were scheduled for these cars including high speed demo laps, autograph signing with Peter Brock (Designer) and Alan Grant who drove the car to victory along with Bob Bondurant. Sadly Bob was not at the event.

Included in the many events celebrating the Shelby Daytona Coupe, Shelby launched its 50th anniversary model. A stunning polished aluminum 50th anniversary edition Shelby Daytona Coupe was flown in by Shelby to attend the event. A fiberglass model is also available which was also designed by Peter Brock as a street friendly version of the original race car but this model was not at Goodwood having just returned from a launch in Montery CA weeks earlier.

There was a lot of Hype surrounding the six original cars. Peter Brock had waited over 50-years to see the cars presented together and was asked the story behind this legendary car. “‘The thing is the Shelby race team had absolutely no money, I even had to go to the butchers to buy a big roll of brown paper to draw up the design on the floor! It took just 90-days to do so, we had to make a lot of compromises which I only got to rectify when the Superformance Daytona Coupe’s were made.”

He went on to say that subtle changes were made to each of the six cars throughout their racing career and he pointed some of these out.

Peter pointed out that the Ferraris were hitting 185mph and that on the first day of testing the Shelby Daytona Coupe hit 183mph. The mechanics knew that with higher gearing they would be up into the 190s. He said “It was incredible that, when we took the car to Daytona, whoever drove them broke the lap record.

Bob Holbert had never driven it before, but jumped right in and set a new record. Then Dave MacDonald hopped in and and he broke the record. The same thing happened at Sebring. At Le Mans Jo Schlesser broke the lap record and at Spa Phil Hill did the same. None of these guys had driven the car before!”

Peter commented that the car uses a very simply chassis design and is a simple automobile but added “‘It is really fun to drive.”