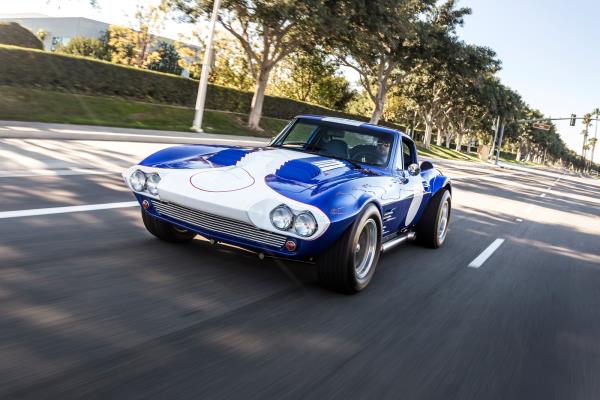 Between Superformance and Shelby American there is no shortage of great Grand Sports, GT40s, Cobras, Cobra 289 FIA and Cobra Daytona Coupes

We say this because we just drove one. No, sadly, not one of the original five Corvette Grand Sports made by the great Zora Arkus-Duntov. Those are all in private hands, lovingly cared for and even occasionally brought out to a track event here and there. The responsibility of driving one of those would be like having to juggle a handful of Faberge eggs, or reframe the Mona Lisa – you wouldn’t want to make a mistake. No, we drove a remarkably close replica made by Superformance and provided to us by Superformance authorized dealer Hillbank Motor Corporation in Irvine, Calif.

You may have heard of the Grand Sport. Back in the early ‘60s it seemed America’s sports car, the Corvette, was being beaten regularly by America’s other sports car, the Shelby Cobra. GM, despite the official ban on motorsports, wanted to do something about it. So with a secret budget in a secret garage somewhere in a secret Warren, Michigan basement, Corvette chief engineer Zora Arkus-Duntov got to work.

First thing was to lighten it up. The new car was even called “The Lightweight.” The stock Corvette weighed about a thousand pounds more than the Cobras that were beating it so weight was the first thing to go. Duntov replaced cast iron and steel components throughout the car with aluminum and magnesium parts wherever possible, and replaced the steel cage with an aluminum cage on which he hung thinner fiberglass body panels. Legend is you could see through them. The Lightweight then weighed about 1,300 pounds less than a stock 'Vette.

Then he added more power. The first Grand Sport of the five, #001, got a 360-hp fuel-injected 327 V8. Eventually Grand Sports ran 377 cubic-inch aluminum small blocks with four side draft Webers all good for 550 hp. Then they started beating the Cobras, and Corvette fans across the nation cheered.

The glory of the Grand Sport lasted only a couple years before rules, racing bans and progress ended their dominance. But to the Corvette Faithful, the cognoscenti, the potential future buyers Superformance hopes are out there? What years they were.

Now you can relive the glory of that era. You can be Roger Penske winning at Nassau or Dr. Dick Thompson winning the SCCA Nationals at Watkins Glen. The Superformance Grand Sport - one of the best arguments for the new small-volume manufacturer law - is built around an “original-style” tube chassis with a lightweight fiberglass body all sliced up with vents and louvers to get all that air out and make it go faster. Of the five originals this replica looks most like #003, with side exhausts, wide fender flares to accommodate nine inch-wide tires and even the rear differential cooler mounted on the rear deck. The deep blue paint and white racing stripe finish it off.

Since it’s technically a kit, it’s sold minus the engine and transmission for $99,900. Owners can put in whatever powertrain they want. Ours had a mighty Katech LS3 making 550 hp mated to a five-speed manual trans. In the parking lot of Hillbank Motor Corporation in Irvine, Calif, 3,000 miles from Nassau, we clambered in. The Grand Sport is crude, yes, and brutal, of course, yet powerfully glorious. Push the beefy, meaty clutch pedal down -- go on, push it you wimp! All the way! This ain’t no Miata with “lightweight pedal action.” There’s no damned bud vase in here. Fire the big bore bruiser under the hood with a satisfying ker-whap! and listen to each explosion in each of the eight cylinders. Whapwhapwhapwheeeeee… Put it in gear, let out the clutch like it was some kind of weight machine at the gym where you’ve placed the pin way too low and whoosh, you’re off. 1963 never felt so good. The power comes on way down low on the tach. There’s no waiting politely for turbos to spool up or VTEC to do some high-tech whatever. All the power you will ever get – all the power this nation will ever want – is right there on the right. Just step on it.

(Hey, are there any law enforcement personnel around?)

It has power steering so you get a little help getting around corners. The rear transverse leaf spring suspension and front coilovers with Bilstein shocks keep the whole thing in line at speed and in curves. But it is a lot of work. You are fully involved in the process of driving. You have to be present and at work for this thing to go. There is no cruise control, no autonomous robotic behavior nanny, no OnStar. There is only you and 550 hp from 1963.

We rumble back into the Hillbank parking lot a new man, ready to hunt down and eat a live buffalo or at least operate a chainsaw. Instead, there are more cars.

First car after the Grand Sport is a Shelby Cobra Daytona Coupe ($109,995 before engine and trans). Pete Brock, are you reading this?

This one has a 427 Windsor motor built by Roush and a lighter clutch pedal. It’s not what we might have expected. The steering is light(er), the clutch pedal is (relatively) light, the gear engagement is easy, it’s quiet(er) inside, there’s air conditioning and the air conditioning works! But it is still powerful, and fast. We are transported from Nassau to Le Mans.

But only for a short while. Next we get into a Shelby Cobra 289 Slab Side, the one that started it all, the original. Or a very good facsimile of it. It has transverse leaf springs front and rear. The brakes feel unboosted. The manual shifter has a longish throw but is still very precise. The steering’s not as direct as the other two cars and the rear end bounces around a little. But the 289 still has a lot of torque. Again, you are drawn into it, you have to be to drive it. It’s a fully engaging experience nothing at all like a modern car.

Then there was a “Superformance MkII FIA built under license from Carroll Shelby Licensing.” Who knows all the legal wrangling that goes on behind the scenes between all the entities that must come together to make these cars? We’re just here to drive them. All three pedals are offset to the left, just like the original. This one, too, has transverse leaf springs front and rear, but with a lot more power. This increases our respect for those early racers even more. The 427 is loaded with torque, but this is a little more civilized, with power steering and power brakes to make it a little easier behind the wheel, but it’s otherwise just as raw and compelling as the others.

Hillbank also sells Superformance GT40s, one of which we drove a few years ago -- an experience from which we are still smiling.

And then it was all over and we were left to contemplate our lot in life. And our car, the one we’d have to drive home in. It was a Volkswagen Jetta, which is a fine competitor in the compact sedan segment in the North American market. But oh the ignominy. We put on dark glasses and drove home, better for the day we’d had, considering the whole way how to cobble together $99,900 and a Katech drivetrain.