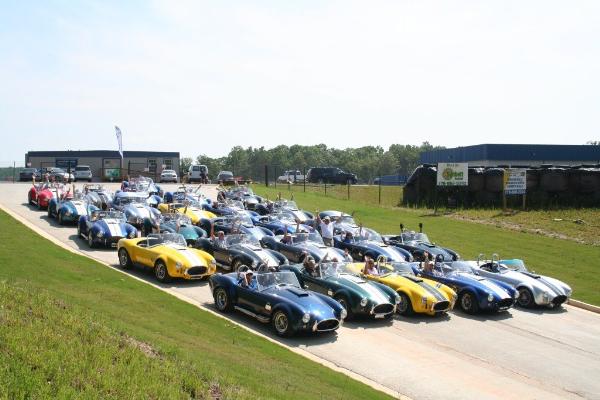 This year's SCOF (Superformance Car Owners Forum) Spring event was the 35th event SCOF has held. This was the 11th Spring Superformance Roundup and was held in Murphy, North Carolina, a picturesque town where just getting there was a challenge. The Hotel parking lot was pure Superformance as owners strategically inserted 13 trailers (home to the cars) into one small parking lot along with the 9 cars that drove there. The overflow parking lot was home to another 5 trailers with cars.

On Wednesday owners led by Randall Thomas headed out South to Georgia. What.... no tail of the dragon you may ask? Well folks, I'm here to tell you while the Dragon is good, it's for amateurs compared to the roads of North Georgia. So then why are we on a four lane Interstate? Many folk wondered... but we had a plan. We wound up at the newly christened AMP-Atlanta Motorsports Park near Dawsonville Georgia and owned by Jeremy. The track was so new it was still home to some building equipment. This track is "spectacular"! and as Owners we were afforded privet several spirited laps with their cars in an extra special session.

Next was a visit to the Awesome Bill Elliott's Motor Complex in Dawsonville Georgia. Ernie Elliott waiting for us to give owners a personal tour which included a sneak preview on Ernie's testing and building of a new FE motor which will be available for the Cobra application. The company is using their proven NASCAR technology and experience. Currently they offer 427 FE street version at 700hp very reliable horsepower.

After all that excitement, Owners enjoyed Lunch atop a mountain with a road more suited for an Alpine ski chair lift then a car on the road. We counted 26 Superformance cars which were making their way to a road called "The Snake". Wow! With all the curves, it was certainly a driving pleasure! It was a blast. We came out on yet another great road and Randall led the pack onto a left turn with resulted in a really narrow road and a thickly wooded path. Then pavement turns to gravel. Then gravel turns to dirt. Then dirt turns to mud. We are now on a one lane mud path in the woods, and it starts to rain. HARD. Not ONE person behind me said a word or complained... thinking this was part of the route. Now imagine any other Cobra group doing this. They'd freak out. This just goes to show you how resilient SCOF members are, and how tough and reliable Superformance cars are. Eventually we reemerged and hit pavement again and headed back to the hotel for a great dinner at Murphy, the outdoor hilltop restaurant.

Friday set the stage for another sunny morning again in the North Carolina hills. We all filed out of the parking lot and wound our way through some awesome roads to a little gas station. Then it was off to the top of Brasstown Bald mountain and then off to "the Snake" once again. The Snake rivals and may exceed the fun level of "the Dragon" but with a much less known location. Average speed is 25-35mph After taming "the Snake" once again, we headed to the little town of Helen, Georgia, a Bavarian type village with a German atmosphere. The place was very BUSY !as there were 2000 VW's in town for a convention.

Back at the hotel where some owners tinkered with their cars and of course a great amount of time was spent on detailing them. It was about midnight when everyone hugged and said their goodbyes in preparation for their early rides home.

The 2012 SSR presented 400 miles of the curviest roads in two days, with members coming in from 17 states all across the country. Even though some owners got lost they were later found and even though some encountered minor troubles they were resolved. While North Carolina was great, the roads of Northern Georgia are spectacular. Owners had a lot of fun on the twisty turny roads. It was great to have so many cars together and to meet a number of new members.

Great time. Great people. Great cars. A special thanks to Randall who co-ordinated and planned the entire trip. - Website: www.Superformance.Org